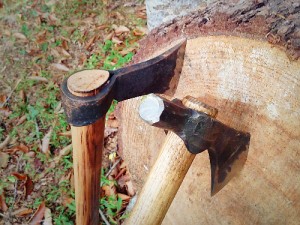 Wikipedia defines a tomahawk (also referred to as a hawk) as “…a type of single-handed axe from North America, traditionally resembling a hatchet with a straight shaft. The name came into the English language in the 17th century as an adaptation of the Powhatan (Virginian Algonquian) word.” As blacksmiths began to forge tomahawks they were modified beyond a weapon to include utility capabilities as a tool.

I was introduced to “hawks” at a Boy Scout camp when I served as an assistant Scout Master where I hung out in the “Mountain Man” area. It seemed like such a manly thing to throw hawks at the thick slices of pine log targets. It was quite addictive.

Several years ago I visited Turtle Island Preserve where I began to occasionally teach classes and do survival skill demonstrations. During an open house event I met Justin Burke who has since then opened a blacksmith business. A few years ago I made a trade with him for a throwing tomahawk. It has beautiful craftsmanship and throws wonderfully. Recently I acquired a second “multi-purpose” hawk from him that includes a hammer portion and he asked me to “try it out”, hence this article.

I started my tests by throwing the hawk into a pine log target. I decided to throw both of my hawks in order to compare them. I threw my original hawk and stuck it on the first try. When I threw the new hawk I discovered that it was a little heavier and would spin slightly slower so I backed up a couple of feet to find it’s range and then stuck it on the third try. The photo shows my results. They both throw wonderfully.

Then I set out to chop and split wood in the same manner as a hatchet. I initially choked up on the handle a little but as I grew comfortable with chopping I held it lower toward the end to feel the difference. It worked as well but “the jury’s out” on which position I’ll like best. I chopped both seasoned wood and a sapling. The wood chips really flew fast. I took a split seasoned log and easily reduced it down to kindling.

Finally I got some nails to drive in some lumber using the hammer end. Again, with a little handling adjustment for the longer handle the nails yielded to the hawk very well. The linear motion of the head made smooth strokes with a solid hit.

I’m delighted with this style tomahawk. I imagine that a slight “V” cut on the inner blade might facilitate pulling nails but a tomahawk isn’t meant to be a carpentry tool per se. I appreciate the quality of workmanship produced by my friend Justin Burke. You can visit his webpage at https://www.facebook.com/JustinBurkeTraditionalCraftsman and perhaps begin your own venture into the legacy and skills of the tomahawk.