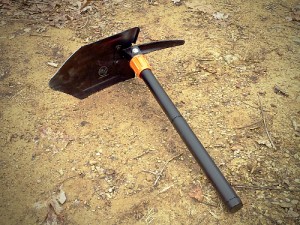 I was contacted by Survival Hax, an on-line store that features a survival blog and offers a variety of products to outdoor enthusiasts. They offered to send me their Survival Shovel to try out in exchange for writing a review. I was delighted to accept their offer.

I received the Survival Shovel in just a few days and I immediately opened the shipping box. The product box is labeled “survival shovel”, “folding shovel with pick axe, saw and fire starter”. I eagerly opened it and withdrew the contents. The shovel comes in a pouch that measures roughly seven by ten inches with a total weight of two pounds. I removed the shovel from the pouch and saw that it comes in two parts; the shovel head assembly that included a short handle and a handle extension that screws into it. The un-assembled shovel measures eight and a half inches in length. The extension handle was so smooth that I initially had a little difficultly attaching it but finally accomplished the connection.

The pick side is used to break up hard soil which is then scraped together with the shovel blade for removal. When soil or debris is soft the blade alone can be used. One interesting feature of the shovel blade is that it has a serrated edge on one side. This design element was included to enable it to cut away brush or make kindling. I was able to cut through a half-inch sapling but the thick paint coating on the blade limited it’s effectiveness. In lieu of a knife, notches could be made in wood for construction purposes of camp-craft. I also used the shovel to trim my gravel driveway and was pleasantly surprised at it’s effectiveness by alternating the pick and shovel blades. I did notice that when I used the serrated side of the blade in the pick axe configuration the handle would tend to unscrew and occasionally needed tightening but when striking with the center or left side of the blade there was no issue.

The third component of this survival shovel is a ferrocerium rod that is fastened inside the end cap of the handle extension. The end-cap is knurled so it is easy to remove. In my opinion this is a bonus element of the shovel but not the main function. Because of the robust paint job on the shovel the edges of the blade were blunt and I was unable to use it to make a spark from the ferro rod initially. It takes a sharp edge to scrape a ferro rod in order to get a spark. Because I was determined to have success at making a fire I scraped the paint off the blade edge by scraping the blade on a rock. Because ferro rods can be brittle I held the knob in one hand while laying the rod flat on a stump for support, then gave it a glancing blow with the blade using the other hand and eventually produced a spark that was caught on some cattail fluff and nursed into a flame. If you had a knife or sharp rock they would be easier to use as a striker but having a handy ferro rod stored in the handle is a good idea.

I give this survival shovel a thumb’s up for it’s sturdy construction and effectiveness as a compact trowel and pick axe. This would be a great addition to your vehicle’s emergency kit and as a camping tool for trenching as needed. Survival Hax offers more outdoor and survival products and is worth visiting them online.