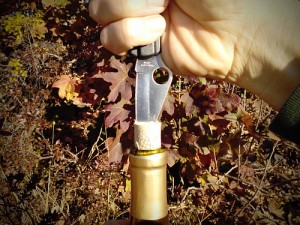 This past week I enjoyed a wonderful Thanksgiving meal with family and extended family members. As part of the celebration my youngest world traveling son brought red and white wines to complement the bountiful food offerings. He looked at me with a gleam in his eye and asked me “Dad, do you know how to open a bottle of wine without a corkscrew?” to which I replied “Yep… several”. He looked a little disappointed. You know, dads feel the need to have a little prowess over their offspring. I had seen several ways over different television programs but I also know that there are probably many more ways that I didn’t know so I said “please show me YOUR way because it may be new to me.” Sure enough, it WAS new to me so I paid close attention as he explained the process.

He proceeded to remove the wrapper off the top of the wine bottle then took a steak knife and pressed it into the top of the cork. This particular cork was the newer plastic foam types but the natural corks would work the same. After embedding the knife about an inch deep he began to twist the knife slowly as he pulled the knife upward. In a sense the knife blade acted as a big screw driver that provided good torque for loosening the cork from the neck of the wine bottle. The area of contact between the knife blade and cork body provided enough friction to pull it upward. A steak knife might have a slight advantage as the serrated edge might add slight additional surface grip. After several twists of the blade the cork emerged to a point where it could be grasped by hand and removed.

I was so excited! I asked if I could give it a try on the other wine bottle. After a few attempts at setting the blade deep enough I too was successful and was delighted to have learned a new skill. On a subsequent day I tried this with my pocket knife and I learned two things; position the blade’s edge away from you for safety sake, and insert the blade with the flat side at a slight angle so that it is less likely to slip out and enhances the lifting capability.

Is this a life saving skill? Maybe. But it could certainly save the day when a corkscrew is forgotten or lost and is a great addition to your McGyver skills. If you want to learn more methods to open a wine bottle check out this link http://www.wikihow.com/Open-a-Wine-Bottle-Without-a-Corkscrew .