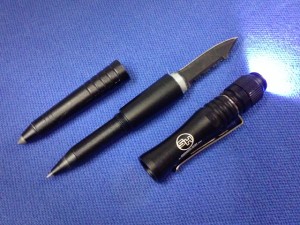 I was delighted to receive a package from Survival Hax recently. I couldn’t wait to open it up because it contained their Tactical LED Pen. I was eager to see the features and try it out. There are basically four features of this tactical pen; an LED light, a glass breaker, a knife blade with straight and serrated edges, and of course an ink pen.

The first thing that I examined was the LED light. It was surprisingly bright. It uses button batteries that are stored within the head portion. To turn the light on you twist the head clock-wise and tighten it down. The connection was quite loose so I got some Teflon tape and made a wrap around the threads that snugged it up so that it wouldn’t unscrew and accidentally come off as so many of my mini lights have done in the past. The Teflon tape also acted as a moisture barrier. If the light is lightly tightened it can be turned on by just pressing it downward and could be used to send Morse Code signals by tapping with your thumb. 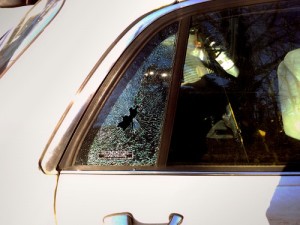 Next I examined the glass breaker. At first glance you might mistake it for being the pen tip but it is much wider with a more robust tip. A few days later I went to an auto junk yard and got permission to test the glass breaker on a car window. The window was penetrated instantly and easily when struck. The glass breaker portion covers the pen portion and is unscrewed and removed to reveal the pen.

The pen’s ferrel portion located above the pen tip is ringed with concentric grooves so it stays in position between your fingers as you write and is quite comfortable. The cone shaped transition piece between the ferrel and point can be removed in order to replace the ink pen cartridge.

Just above the pen is the junction to the knife blade. Just screw off the lower glass breaker/pen assembly and withdraw the blade. It too was a little loose so I put some Teflon tape there too. It is one and a half inches long with a sharp straight edge on one side and a serrated edge on the opposite side. The point of the blade has a swedge or false edge that allows it to have good penetration when thrusted. The knife blade was quite sharp and the serrated edge worked well when cutting cordage and other items.

Another feature of the pen is a strong clip that keeps the pen secure whether clipped inside a pocket or on a lanyard.

The Tactical LED Pen when fully assembled doubles as a Kubotan and can be used as a self defense weapon. Self defense methods using this are best learned from professionals before engaging this way.

I was very impressed with this Tactical LED Pen and it has become my new Every Day Carry (EDC) buddy. Click HERE for more information.