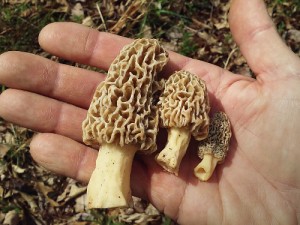 Years ago my family and I moved from California to North Carolina. We spent a year or so on an old apple orchard in the Brushy Mountains of Northwest North Carolina. We had a wood stove for heat which was a contrast from our living conditions on the West Coast in Silicon Valley. We met our closest neighbor who was a mountain man who shared some pearls of wisdom about living on the mountain. He mentioned that “dryland fish” could be found in the Spring around Easter time under the apple trees. Whenever we looked for them we were unsuccessful. After we moved on to another location we would drop by to meet the current residents and asked them to contact us when they found some but never received a call.

My interest in mushrooms became a hobby about a year and a half ago and I am fortunate to have two mushroom mentors who have helped me learn which kinds are edible and where to look for them. I present my finds to them for positive identification. I focus on the distinctive edible varieties that are not easily misidentified. Morels fall in this category as they appear as a miniature sponge tree that is completely hollow inside including the stem.

This Spring I was determined to seek out the elusive morel and returned to that orchard. After meeting with the residents they granted permission to search for the morels and sent their young daughter with me on the hunt. Others had gone before us so we didn’t know if any were left. She spotted two that were very small but I was delighted to finally see them in person. I returned a week later to hunt on my own and found those shown in the photograph. My first personal finds!

When I brought them home I soaked them in water for awhile then rinsed them under the faucet… evidently not well enough as they were a little gritty when eaten. Next time, like leeks, I will slice them lengthwise first to facilitate better cleaning. They tasted good none-the-less and I look forward to my next find.

The morels pictured above are yellow morels. Some of my friends have found black morels in nearby areas. Perhaps I will explore farther afield for those. In any case I am glad to have had victory in finding for myself the elusive morel.