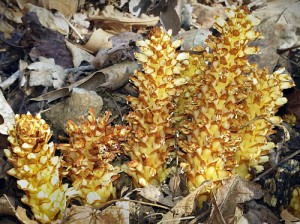 Recently I walked in the woods looking over patches of mayapples to see if fruit had appeared. Although I saw no fruits or blossoms I came across small thumb sized groups of sprouting plants that were unfamiliar to me. They looked like thumb sized asparagus shoots. Later that day I sent a photo of them to a friend who identified them as Bear Corn which is also known as Squaw Root, Cancer Root, and Indian Corn. They are parasitic plants that live off oak tree roots and are found spread out on the ground above the root system. Evidently they emerge about the same time as bears emerge from hibernation and it is a favored food for them. They contain oxalic acid and need to be leached before consumption.

Learning that this plant was edible I went back to the site and picked several blossoms to cook. Before I cooked them I decided to take a small bite to taste and WOW! it was terribly bitter! I hoped that cooking them would make a difference. I cut each one lengthwise and tossed them into a pan containing pre-heated “faucet hot” water then put it on the stove top burner to bring it to a boil for ten minutes. After draining it I repeated the process another two times before I was ready to sample the finished product. Although it had reduced the initial bitterness, it still was significant. I took a knife and scraped off the scaly outer blossoms down to the core which had become slightly mushy from the repeated boilings. This made a slight improvement.

I went back into the woods to get a second harvest and decided to peel off the blossoms first before doing the triple boil method. It seemed to make a difference and made the bear corn tolerable to eat. The next morning I peeled some more to the core and fried them in butter… butter makes anything taste better and yet the underlying bitterness was still present. The stalk can also be dried and brewed into a tea.

Bear Corn / Squaw Root has a long history of medicinal use, particularly for female maladies whose applications and details can be found from various sources online. Like most medicinal herbs it should not be taken for an indefinite period of time. Excess intake can act as a laxative.

I would say that palatability is an important factor in the edibility of food and this would not be a first choice to eat but I can see how this can be a possible backup food source in an emergency.