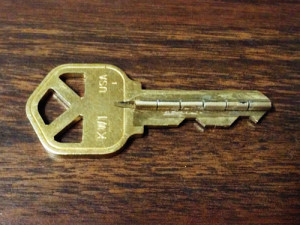 I’ve always been fascinated with the “flints” used in flintwheel lighters. They are actually mini ferrocerium rods and I’ve wondered what other applications they might have outside of their intended product use. Ball point pens could be used as a handle that have the right size tip where one flint can be put in place of an ink cartridge tip but the reality is that the sparks produced from a single flint is minimal when used for natural tinder without the knurled wheel to strike it.

I bought a packet of lighter flints and after examining the dispenser I noticed that it contains six flints that were lined up end-to-end and I wondered if they could be mounted similarly outside of the dispenser and used like conventional rods. The problem was, what kind of platform could they be mounted to?

It dawned on me that keys have built-in grooves based on a locks wards and that the mini ferro rods could be lined up inside a groove and glued in place. I got some instant drying glue (cyanoacrylate) and glued them end-to-end to form a rod then glued them as well along the groove. The six pieces in the dispenser fit perfectly along the length. After the glue dried I put down a cotton ball on the concrete floor, placed the key upright on it, and used a blade to strike along the new ferro “rod” successfully creating a fire. 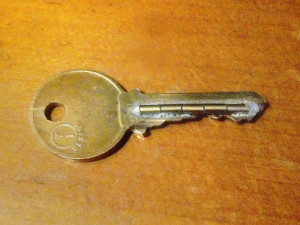 After creating several fires the mini ferros began to flake off so I went to a hardware store and asked the employee for a used key that had a “deep grove”. After explaining my project he found a good match (which he gave to me for free), and with more surface contact for gluing the mini ferros stuck better and longer. I used only five ferro pieces this time so that I could use a technique to build up the glue at each end of the row as described in my article “Amazing Baking Soda & Instant Glue Emergency Repairs” to give it extra linear support.

The “DIY ferro key” may have a short life span but if used successfully only once in an emergency situation is worth having as an Every Day Carry (EDC). When out and about it would pass discreetly through occasional check points so that it would always be available to you. Although knife blades are the easiest to use as strikers, many hard/sharp objects will work such as a P38 can opener. This is a fun project that could be a life saver in an emergency situation.