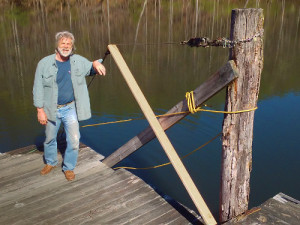 There may be times in your life where something heavy may need to be lifted, and sometimes you may be the only one available to do it. I have had a couple of situations in the past couple of years that challengened my thinking on how to go about it.

My first experience was the need to raise a drooping deck that was cantilevered off of a dock. It had dipped into the water but should have been positioned nine inches above it. I had considered using temporary pylons to use in conjunction with jacks but the pond floor was muddy and unstable. Another approach could have been to attach a come-along winch to the dock’s pylon and attaching to the end of the deck, but that would only draw the deck closer to the dock but not lift it up. Then I remembered gin pole trucks.

Gin pole trucks function like portable cranes using poles in conjunction with winches to lift loads up for repair or onto their flat bed for transport. Of course they could be used a number of ways but they use the angle and height of lift to accomplish their task. That gave me the solution to my problem. I placed a 2×4 stud midway between the deck’s outer edge and the dock’s pylon. When I applied the come-alone winch it lifted the deck up to the needed height whereupon I could refasten the original suspending timbers. 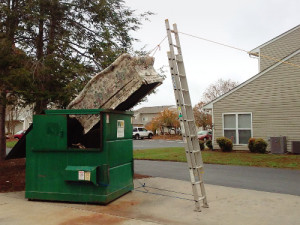 More recently I was tasked to remove a couch that had been lifted into a dumpster. It not only was too large to fit but it also was not allowed by the waste management company. It was too heavy to just pull it up and out by myself. I needed a mechanical advantage. I remembered my dock experience and wondered what I could use for a gin pole. I decided that an extension ladder might do the trick. Instead of using a winch I decided to use my vehicle to pull on the lines that I would attach to the couch and ladder.

I anchored the bottom of the ladder by tying it to the dumpster base then proceeded to attach a second line to the couch, ladder, and my vehicle. As I backed up the vehicle the ladder rose up, pulling the couch up and out. Had it been a heavier load it would have been advisable to use guy-lines off to the sides as well as a higher extension of the ladder. As it turned out I was able to maneuver the couch and ladder off of the dumpster’s edge as they slid down off to the side in a controlled fashion.

In both cases a higher angle of force was needed to lift each load and that may be just the ticket for you on your next project or in an emergency situation. Be sure to exercise safety precautions and use side guy-lines for stability with heavy loads.