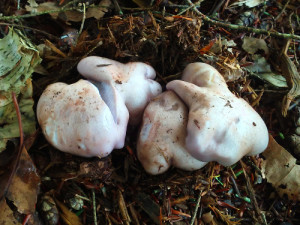 Over the last couple of years I’ve been expanding my awareness of edible mushrooms. I am fortunate to have two mentors who have shared their knowledge and been my go-to folks for positive identification. Although I may not be as pro-active as some foragers I have often found mushrooms on my path of outdoor activities. Recently I observed some interesting mushrooms that were pale lavender or lilac in color that peaked my interest. Coincidentally my friend on social media in a neighboring state posted her find of “Blewit” mushrooms that looked exactly like my discovery so I sent photos of my find to her for identification. After her positive response I knew that I wanted to know more. 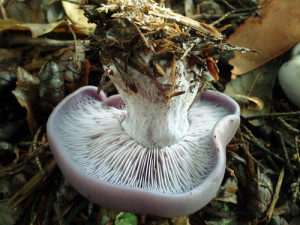 Blewit mushrooms have a pale color, often described as blue, lavender, lilac, or mauve, sometimes with a light beige color mixed in, especially as they mature. They often grow in small groups but can also grow as a single mushroom. Their lavender color sets them apart in appearance from similar mushrooms. They have a simple cap, sometimes wavy, a stock, and purple gills. I found mine pushing their way up through landscape mulch. They are known as cooler weather mushrooms that can be found later in the year than other edibles. 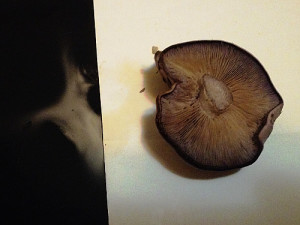 I also sent photos to my mentors who confirmed their identification, but because they didn’t actually see the Blewits in person I decided to do a spore print over night. When I do a spore print I cut off the cap and place it gill-side down on top of a sheet of paper that has a black side and white side, that way the spores will be revealed whether they are light or dark in color. Blewits leave a light pinkish/beige print vs. a toxic look-a-like mushroom that produces a dark brown print. As seen in the photo the spore print confirmed that they were Blewits.

Blewits are compared in texture to button mushrooms that you might find in grocery stores. They need to be thoroughly cooked before consumption and their color tends to fade as they are cooked. I fried some up and added them to an omelet… they were delicious! I am so pleased to add blewits to my edibles knowledge and experience. This Fall is a great time to keep a look-out for them, and be sure to pass them by a local expert for positive identification.