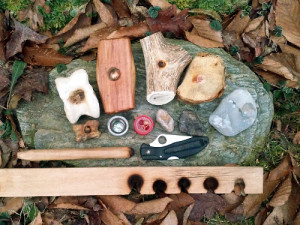 Over the years of practicing and teaching the bow and spindle friction fire method I have used many different items as a bearing block with which to hold the spindle in place during the process. They span traditional natural materials to modern “trash” items.

A “bearing block” is any device that is used to bear down on the top end of a spindle to facilitate the stability and pressure of the spindle as it is spun using a bow or strap. There is usually an indentation that keeps the tip of the spindle in place. The best feature of a bearing block is that it is hard and durable while at the same time being as friction free as possible. Sometimes folks will add a little grease, fat, or wax to the socket to optimize it’s performance.

Natural sockets might be found in rocks, shells, and bones. Natural materials for crafting bearing blocks might include wood, stone, and antlers. It is possible to use both halves of a split branch for fire by friction with one half used for the hearth board while the other half is used as the bearing block. I prefer using the same wood for both the spindle and hearthboard but it is best to use a more durable material for the bearing block to minimize friction on the top end of the spindle.

In modern times there are a number of “trash” items that can be used in an emergency or on a temporary basis such as bottle caps, pipe caps, concave wine bottle bottoms and such. More durable bearing blocks have been made using machine bearings, embedded coins, or anything that forms a socket shape that will not get too hot or disintegrate during the bowing process. Some knife manufacturers have designed sockets in their handles for emergency use. I have used a circle feature in the blade on one of my folding knives.

In the end, there are a variety of items that can be used as a bearing block and I would suggest that those who practice firecraft should experiment with different things to become aware of strengths and weaknesses of materials and learn how to improvise when needed. What items have you used for bearing blocks?