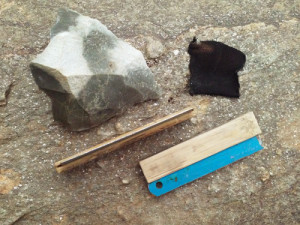 Years ago when I was first learning about flint and steel firecraft I experimented with different metal objects to use as a striker. While doing some on-line research I came across a forum where a Boy Scout leader had used hack-saw blades for strikers. The blades were inexpensive and contained high carbon steel which made then both affordable and effective. I tried using some hacksaw blades and was successful but wanted to make them easier to use so I fashioned a handle and attached it to one and was pleased with the result.

I took a hacksaw blade and broke it into three inch pieces, then I took some wood trim and cut three inch lengths. I put a wood piece into a vice and used a hacksaw to cut a slot about an eight inch deep down the side. I applied some wood glue into the slot and placed the “tooth” side of the hacksaw blade into it and let it dry over night.

The wood handle makes it so much easier to use and costs to little to make. It would be a great project for Scout Troops or home schoolers or anyone interested in learning flint and steel firecraft. When I teach classes I have several strikers available for my students to use. You might want to make a DIY flint and steel kit using an Altoids tin along with some unraveled jute twine and charcloth. A small chip of flint, chert, quartz or even Corel Ware can be used to strike against to create sparks. The three inch striker will conveniently fit inside.