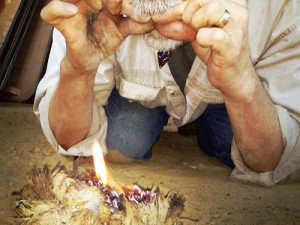 At an event recently I was demonstrating a fire-by-friction method. The goal of fire-by-friction is to produce a coal (or ember) that in turn is placed in a tinder bundle. Tinder bundles are also known as “birds nests” where a coal can be placed in the center and left to smolder a bit then coaxed into a flame by gently blowing on it. The bundle is often held up head-high with both hands and close to one’s mouth while blowing into it. It is wise to turn one’s head to the side between blowings so as to avoid inhaling smoke. Eventially the bundle will get too hot to handle and be set down once a flame is formed. 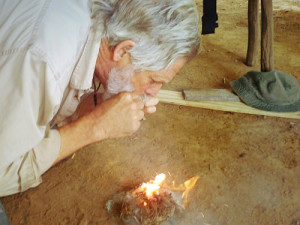 A friend of mine, and fellow firecrafter, was demonstrating a method of blowing that can be done from a distance while the bundle rests on the ground, thus avoiding the heat and smoke normally associated with the hand-held method. He used his fingers to direct his breath in a focused manner, enabling him to grow the ember from a distance.

As shown in the top photo the tips of both thumbs and forefingers are held together thus forming a small diamond-shaped hole where they touch. Your lips are placed over the top and bottom of the thumbs and fingers while you blow through the hole and the resulting channel of wind can be focused on the coal in the bird’s nest. Properly done there is no sound produced when blowing. Your cheeks act like a bellows to gather air while blowing through the hole. You can practice aiming your breath while blowing over dry dirt or blades of grass to see where the air stream hits.

He mentioned that by tradition the name of the “diamond” method is prefaced by the State where you learned it as long as it is outside of the State that you were born in and so this method and tradition is passed on to the next firecrafter. He also encouraged me to use this method to blow out the candles on my next birthday cake and “wow” the crowd in attendance.