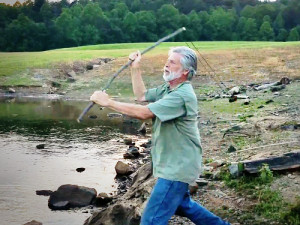 While viewing some social media videos I was introduced to the Shepard’s Staff Sling. This weapon design has been used over past millennia and continues to be viable today. There have been many artist’s depictions of David and Goliath as mentioned in the Bible where David is shown with a hand sling. It is very possible that he used a staff sling instead where Goliath is quoted in 1 Samuel 17:34 “…am I a dog that thou comest to me with staves?”. What is so impressive is the velocity that this device creates and the large size of it’s payload. The staff sling is similar to a trebuchet in that a sling is attached to the end of a pole, thus adding leverage to it’s launch. I knew that it was something that I had to try.

There are only three components to constructing a Shepard’s Staff Sling: a pole, cordage, and a pouch. I felled some saplings that were about as thick as the diameter of a fifty cent piece and cut a five foot length. I had some 550 paracord that I used for straps and a piece of leather scrap that I cut into shape and punched holes for the attachment of the cordage to form a pouch. The top two inches of the staff was trimmed to reduce it’s diameter by about 3/8 inch that resembled a peg when completed. A second 3/8 inch groove was cut three inches below that. The first length of paracord was fastened around this groove and the second length was tied in a loop using a bowline knot that loosely slipped over the top peg portion.

I found that a stone about the size of a tennis ball worked best for me but larger stones can be thrown as well. Rounded stones work best. The action of throwing the stone reminds me of how a lure is cast using a fishing rod: the timing of release is critical but is learned from practice. Another helpful tip is to focus on your target and all of your muscle motor memory will cooperate to deliver the stone to the target. This method works well for anyone who has shoulder injury limitations.

I can see where developing the launching and targeting skills can be addicting and is a lot of fun to learn!