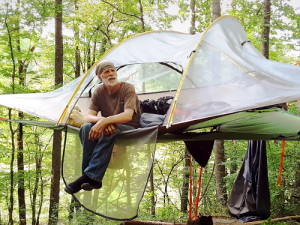 I prefer hammock camping over tent camping, mostly because the older I get the harder the ground feels and sleeping off of the ground is much more comfortable! Of course there are other benefits to hammocks like not being dependent on level or dry ground, plus, I enjoy the initial gentle sway upon entry.

Occasionally in social media I’ve seen what looks like a three person hammock which piqued my interest but in fact it is a suspended tent that is officially described as a “three-person all-season suspended camping tree house tent”. It is basically a three anchor point triangular canvas covered with an integrated mosquito net canopy. It comes with an optional rain tarp.

I wondered what it would be like to spend a night in one with two other adults, thus testing the advertised three person capacity. As it happens, some friends of mine own one and had it set up. With their permission I was able to share an overnight experience with my two adult sons.

The entry is very unique. You can enter it from below via a zippered triangular hatch in the center. This reminded me of my Hennessey Hammock that uses a Velcroed slit for entry. In addition there are three zippered panels available for entry or egress on the sides of the roomy mosquito net canopy.

After all three of us entered the tree tent it seemed that one end of the triangular canvas floor was a little high, so we tried to correct it. The tree tent is suspended using ratcheted straps. We maxed out the tension on the lower end, and we lowered the anchor strap with a little slack on the high end. We felt that it became more comfortable but may have contributed to the ensuing bowl phenomena that we experienced that night.

The somewhat flat surface of the tarp reminded me of a trampoline but it had less support points on the perimeter so it was more flexible and as we entered the tent it would sag in the middle. When I brought in my gear it would slide toward the entry point.

When two persons share a double hammock there is unavoidable major bodily contact but with the large tree tent canvas I thought that this might be avoided but no such luck. It became apparent as we gathered inside that in order to have personal space we had to lay with our feet to the center and heads at the outward points of the triangular canvas. There is an integrated strap at each point so it is uncomfortable to lay in the center of these areas. The outward edges between the anchor points were unusable as we were inclined to roll laterally inward. 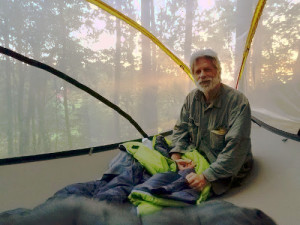 In an effort to not disturb my sons by touching their feet that night I ended up in a fetal position in my corner taking occasional stretches. I was pleased that whenever one of us would shift our sleeping position during the night the resulting shaking was surprisingly minimal. Because we had warm weather we did not feel cold from below that night. We used our sleeping bags only as blankets and realized that we would have slid inward if we had slept in them. Perhaps this problem might have been different using other anchor points and mounting adjustments.

My opinion is that this is a novelty item that is best used for semi-permanent camps or back yard setups. It definitely favors being a tent vs. a hammock. It became evident that my expectation of a hammock was in error but sharing a warm Summer night together with my sons made this a rewarding experience. 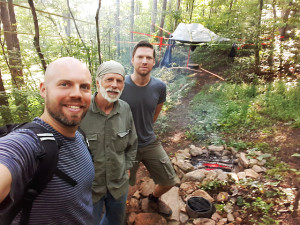 After debriefing my friends the next morning they are considering moving the tree tent to a more suitable area with even spaced trees which may make for better anchoring and more even tensioning. If they do, we have been invited to try another overnight hang to help evaluate what they hope will be a more comfortable experience.

My friends who owned the tree tent invited me back to try it out after they had tightened it up according to the manufacturer’s instructions and it was more comfortable. I tested it with only one other available adult instead of having my two sons with me but it did exhibit more pronounced laying areas along the sides as apposed to our use of the the corners of the triangular canvas. The bottom line is that a hammock and a tree tent are two different structures and therefore they are set up differently. I had applied my hammock experience to a tree tent when I had adjusted it but apparently that led to my overnight comfort demise. So, lesson learned. Hammocks and tree tents are set up differently and each one offers a different lounging experience.