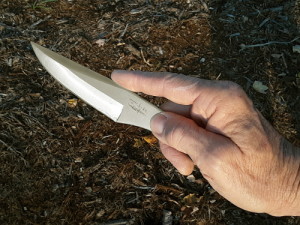 Years ago just before my teen years I saw an advertisement on the back of a comic book for a throwing knife. With the assistance and approval of my parents I sent away for one. Once it arrived I used a cardboard box for a target. I began to learn the need for a consistent throw and about the dynamics of the spinning blade and how to adjust my distance for it to stick.

My interest in throwing knives have come and gone over the years but recently I gained an interest in the no-spin technique. My reasoning to pursue this technique is that the point of the knife will always be pointing at the target during it’s path so even if you don’t throw it exactly right your changes of the point striking a target are greatly improved. I began to watch videos on social media and tried to take mental notes on technique then I would try to apply them in practice.

The method of no-spin throwing is not natural for me and is quite different than the spin-throw method. You begin by placing your forefinger on the spine of the knife blade and “pinch” lightly the handle with your thumb and side of your middle finger. The butt of the handle for me rests in the middle of the palm of my hand.

To begin the throw you raise the knife above head height and slightly to the rear then cast forward while at the same time keeping the knife upright as you throw forward. The knife sort of slips from your hand as you throw it forward and make sure that your forefinger slides down the top of the handle as you release it. The duration of that contact with your forefinger inhibits the rotation of the knife and can be adjusted for the target’s distance.

It’s best to begin throwing at a target at a close distance and as you get comfortable begin to back away slowly, adjusting to that new distance before backing away further. 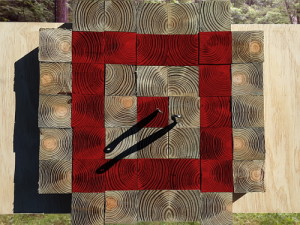 I initially used a wood pallet as my target but it had slits between the boards and so occasionally the knife would pass through them. In addition, the grain of the wood would be resistant to being stuck with the knife so if not perfectly thrown the knife would just bounce off.

After watching a number of videos I observed that many of the throwers had made a throwing target board composed of 4×4 wood blocks mounted like a checker board with the end grain sides mounted facing outward that better receives the knife points so I decided to make one for myself.

I did some math and decided to cut up 2 eight foot 4×4 timbers into 4″ long pieces which I arranged into a 7×7 block pattern minus the four corners. The timbers were treated lumber so I’m letting them dry a little before adhering them together on a plywood board that can be mounted on a tree, fence, or stand. The photo illustrates what the finished target will look like.

Now, after many throws, I am starting to get the feel of this technique and having more successful throws. It’s a little addictive like throwing horse shoes or darts and combines a special skill with pleasure and satisfaction.