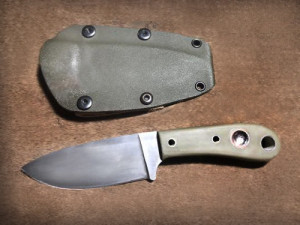 I was recently introduced to a robust fixed blade knife known by the initials HWS (hunter, warrior, scout) made by Kellershop Knives. Currently my knives of choice have been a Kershaw spring assist knife as my EDC and I use a Cold Steel Kukri in the woods because it has three cutting zones with enough weight for chopping.

I was asked to try a fixed blade to see how I might like it as an alternative to my current knives and what would be the features that I would like to see. I said I would like a thick spine with a wide portion of blade for battoning/chopping, a full tang, a non slip grip , a socket in the handle for bow & spindle firecraft, a 90 degree edge for striking ferro rods, and the blade made of carbon steel for flint & steel fire making. The HWS fixed blade knife fulfilled my requirements and I began to put it to the test.

I had to get used to wearing the HWS as my other knives were carried differently. The HWS rides high on my belt but has the advantage of being easily concealed if needed. Because of the high mount I was able to be seated in a car seat or chair but I could also feel the handle against my ribs. The Kydex sheath is very durable but I might explore other options than the leather loops for attachment to my belt. It would also be nice if a ferro rod would be integrated. The Mycarta handle has positive grip even when wet. It also has a 1/2″ hole at the end of the handle that can be used to attach a lanyard but is large enough for straightening arrow shafts for primitive archery enthusiasts. 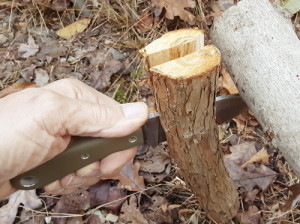 I began to use it for chopping wood but at 8 oz. I found it to be light in weight. Chopping wood using a 4 1/2″ blade with a total length of 8 3/8″ is asking a lot but with persistence it can be used on moderate to small branches and sticks. It works best to use a wide angle approach when chopping.

The hefty blade worked wonderfully when using baton sticks. It was limited only by it’s length but it is very sturdy. Once the wood had been split down I was able to make fuzz sticks by making successively higher cuts along the wood’s edge using the thumb of my opposing hand across the top of the blade to control each cut. I found that a thicker blade works a little differently but with a little adjustment it definitely works. I then wanted to use the HWS features for my firecraft endeavors. 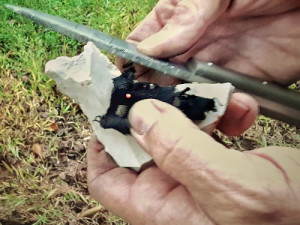 I grabbed a piece of flint and some char cloth. I began to use the back side of the blade to strike the edge of the flint and the initial sparks looked promising but successive sparks were harder to achieve. I was able to catch sparks on the charcloth and join it to some tinder to make a fire. Although dedicated strikers make better sparks they weren’t made to do all that the HWS can do.

It seems that any manufactured edge needs to be ruffed up a bit to be effective. that also goes for a new ferro rod. The flint striking helped to make the top of the blade more aggressive for using with a ferro rod. After several strikes I could throw some sparks and I found the sweet spot for striking to be toward the tip on the backside that gave the easiest and best sparks. 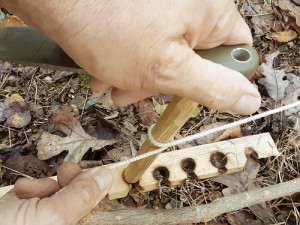 The HWS is a very dependable fixed blade knife. It feels comfortable in the hand and can perform a multitude of bushcraft tasks. All told I was impressed with this knife and it’s craftsmanship by Kellershop Knives.