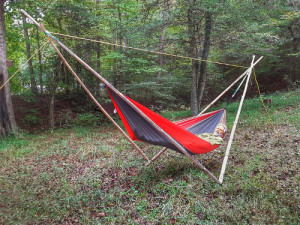 I have become an advocate of hammock camping because of the benefits of comfort and the ability to be suspended off of the ground to avoid critters, unevenness and wet surfaces. However, hammocks need suspension points. In a camping area this is usually provided by trees but I wondered how I could suspend a hammock without the benefit of trees to tie onto.

I was interested to learn about a four pole hammock stand that had commercial origins in the 60’s and later in the 70’s. Today there is a commercial kit described as a Fulcrum Tensahedron Hammock Stand that is produced by tensaoutdoor and if you visit their website you can learn about the evolution of their Tensa4 kit but they also give directions on how to make your own DIY hammock stand. I was inspired by their design and wanted to see if I could make one using four wood poles, in my case, four lengths of bamboo.

Two sets of poles are lashed together at one end of each set to form two inverted “V”s with their opposite ends lashed to the other set at their base. This creates a diamond shape. A ridgeline is suspended between the upper vertices of the “V” segments with guy-lines attached at each end to anchor the stand. A “spreader” line is attached between the bottom vertices for additional stability.

Of course one would wonder where poles would be found if there are no trees in the camping area but that is why this hammock stand would be prepared prior to a trip to such a location.

You may get the gist of how to construct the hammock stand from the photo above but the folks at tensaoutdoor go into greater detail of the construction and proper set-up of this very practical four pole hammock stand.