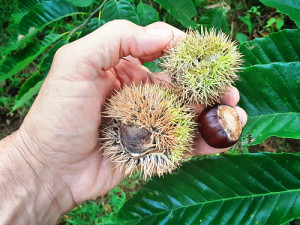 I am delighted to see that the chestnut harvesting season has begun in my region. Chestnuts are a delightful food but they can be tricky to harvest as their outer husk or “burr” is very spiny! The burrs are often paired or clustered on a branch while in the tree. Many of the burrs that I found had fallen and were on the ground.

Chestnuts can be found around the globe but the American chestnut has had a tough history. It was once plentiful and accounted for nearly one-quarter of the hardwoods in the Appalachian Mountains and was a part of the lumber industry. In the early 1900s a blight was accidentally introduced that nearly wiped out this native plant. In recent times hybrids have been developed to produce blight-free trees. You can see the signs of Chestnut blight on the tree trunk in the photo below. 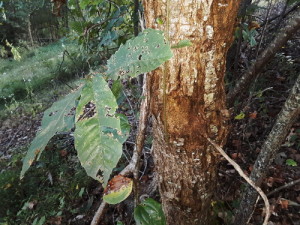 Once the spiny husk is removed you can eat the chestnuts raw, but they may cause gastrointestinal distress because of their high content of tannic acid so it’s best to boil or roast them for consumption. You can use a knife to make a few slits down the sides that makes it easier to remove.

These days there is a great demand in the commercial market for chestnuts but it is very rewarding to find these tasty nuts in the wild so hopefully you can find them in your region and enjoy the reward of their discovery and consumption!