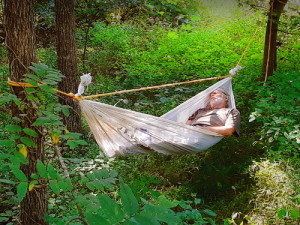 Over the years I’ve seen quite a variety of hammocks on the market and have purchased several. It is my preferred method of camping. But what happens in an emergency when you don’t have your regular gear?… you improvise!

My very first hammock was made out of a single bamboo pole. It was quite comfortable and a viable hammock if that resource is available. However, I have always wanted to take a conventional approach to improvising a hammock by using a tarp or similar material. The two things that I had to consider was the length and width of the fabric and how to suspend it.

Rather than tying a rope on either end of the hammock material I decided to tie the material onto a single suspended rope, using the rope as a ridgeline. I was more likely to have a long length of rope on hand and it also provided a set distance to control the slope of the material that was hung from it. I also believe it puts less tension on the fabric. 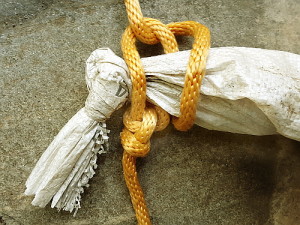 I used a half inch braided rope and tied two alpine knots that are stable in use yet fairly easy to untie. I pulled a portion of the ridgeline down through each loop and lifted it to the side so I could thread the material through the second loop from beneath and over the side of the alpine loop above it. This created a cinching knot that tightened when tension was applied on the suspended rope and held the fabric in place (see photo).

I first tried a fitted queen sized sheet and because of the stretchable corners I tied the strait center portion at the ends of the sheet into a knot and discovered that approach didn’t work. It created an uncomfortable narrow strip of support down the middle and was unusable as a hammock. That let me know that the entire width at the end of a fabric sheet was needed for proper support and should be gathered and tied in order to give even support.

Then I used a queen sized flat sheet and folded it in half lengthwise for proper width. I accordion-folded it at each end which I then tied into a knot. The resulting support area worked okay but the eighty-inch length was too short, however, when hung close to the ground a person could sit in it and straddle the fabric and use it to sleep in while their feet rested on the ground.

Next, I used a regular poly tarp. It was 9′ x7.5′. I folded it lengthwise to make an appropriate width and gathered the ends together. Manufactured tarps are generally made with a hem around it’s perimeter. When accordion folded it becomes thicker at the edge and doesn’t require a knot to be tied when held by the cinch knot in the ridgeline. Again, it was too short but would probably work fine if it was longer.

I finally used a scrap piece of Tyvek building material left over from a construction project. It was four foot wide and I cut it down from a twenty foot length to eleven feet. I was able to gather each end and tie them in a knot. I tied the two ridgeline knots about 9′ apart to suspend the tyvek tarp. This was the ideal formula. In reality the tyvek hammock was a little more comfortable than two of my commercial hammocks because it did not have decorative accent strips on the sides that tend to form ridges and was smoother to lie in.

As all hammock users know, lying on the bias means a more level lay as seen in the first photo. This was a fun project in which I learned a lot. Next time that you pass a new construction site you might inquire about having some of the Tyvek scraps because they are so useful as when used as tarps for ground cloths, overhead cover, or as in this case a wonderful hammock.