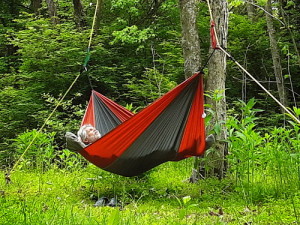 I have enjoyed hammocks for a number of years and own at least three presently. I have also enjoyed trying different hammock hangs that I’ve enjoyed writing about. My most recent adventure is trying out a single tree hang.

My idea was to hang a rope over a high branch in a tree, stake off each end on the ground, and attach each end of the hammock on each sides of the hanging rope. I experienced some interesting results. The main challenge to the hang is the stretching of the rope on each side but also the need for reliable anchor points on the ground.

I was able to coil the rope at one end in order to throw it over a high limb. I used an “over and under” method when coiling the rope that prevents the line from entangling when thrown, but even then it took me four tries before being successful. 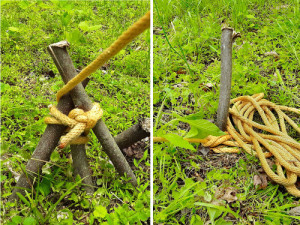 I initially used a foot long stake at each end of the rope to secure them to the ground then used webbing to make prusik knots on each side that I used to attach the hammock. When I attempted to lay in the hammock the challenges began. Not only did the rope stretch which lowered the hammock, but the stakes began to pull out of the moist soil. Then I cut two foot long stakes and tried again. One stake held but it took three stakes to hold on the other end.

Although the initial prusik knots held, I doubled up the knots with my carabiner fastened through them and over the rope with each prusik positioned on opposing sides of the carabiner.

It took a lot of adjustment with trial and error but in the end it worked! I’m not saying that this is a practical method but it was a proof-in-concept that I had to try and learned a lot in the process. Who knows… it might come in handy for you some day!