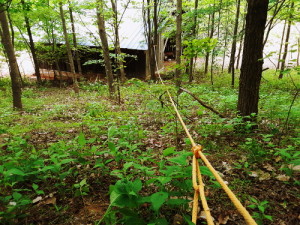 Recently I needed to fell 2 black locust trees that were too close to a barn. The trees were touching each other at the base, one being five inches in diameter and the other seven inches. They both stood fourty feet tall and their branches were intertwined. Using a chainsaw, I cut the base of the larger tree but it wouldn’t budge. I even used a board to leverage them apart only to have it drop off the stump but remained standing so I had to come up with another plan. That’s when I went for my hundred foot rope.

I needed to pull the tree out from the surrounding foliage toward the landing area that I had planned. I began by tying a clove hitch secured with a half hitch around the trunk. Then I walked to a suitable sized tree in line with the landing zone to pull the tree over. I usually use a trucker’s hitch to cinch down but the rope was a braided rope that resisted the usual tie so instead I used an alpine knot for the loop that takes the place of a pulley to pass the rope’s end through. 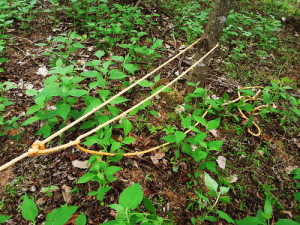 There was enough flex in the tree so that I had to tie the loop farther out from the anchor tree to gain proper leverage. As I pulled the rope the tree tilted towards me but there came a point that I wasn’t strong enough to pull more so I walked mid way to the tree and began to lean on the rope. After several bounces and tugs the tree began to give way slowly and I was to bring the tree down right where I planned. I was delighted.

I tied onto the second tree and began to cut it. To my dismay it began to lean the opposite way and I stopped just in time. Fortunately I had a second rope so I attached it to the tree and anchored on axis to the direction of it’s errant leaning and pulled it back upright. Between the two ropes I was able to reverse it’s initial lean and felled it on top of the first tree!

Using a loop on a rope acts as a pulley and increases your leverage when using it to pull a load, in this case a tree. I used an alpine knot because it can be tied in-line and is easily untied later. If you think in terms of how pulleys work you can use a rope similarly and accomplish amazing feats when needed.