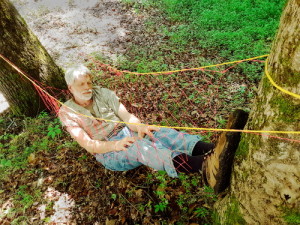 This is another “proof-of-concept” project. I was watching the network show “Alone” where I saw a contestant making a gill net out of string. That was something on my “to do” list of achievements. At the same time I was reminded of my first hammock decades ago that was a string net. I wondered if a gill net could also be used as a hammock so I set out to make one. 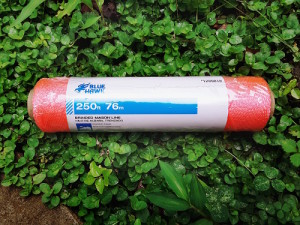 I bought a spool of mason’s line at the big box hardware store for $6. It was 250 ft. I had figured that the project would require 320 ft. but I wondered what I could do with less. I started by stretching a line across an 8 ft. board that I placed between 2 trees. I marked the line with a sharpie pen every 4 inches. Then I cut 12 ft. lengths of line and folded each one in half and began to fasten them onto the top line at each mark using larks head knots (also known as cows hitch knots). 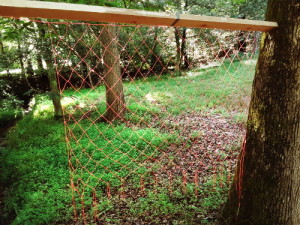 The original plan was to make an 8 ft. wide by 6 ft. tall net. I began to run out of line at the 6 ft. mark and so began to tie the hanging lines at alternate pairs to create the diamond shaped pattern of netting. I would grab the left line and roll the first loop up and hold it while I rolled a second loop beneath the first knot in the opposite direction. I would join the loops together that formed a lark’s head knot after I pulled the right line through the double loop. The lark’s head knot when spread open revealed 2 overhead knots appearing like a square knot that could be adjusted to the right length to create the diamond net cell.

Once I finished the net I had to figure out a way to suspend it. It was obviously too short to hang it like a conventional hammock so I used it like a sling. I used some polypropylene rope to thread through the net’s outer edge loops before attaching them to opposing sides of each tree. Proper practice is to use slings to attach to each tree but for the quick test I just tied the ropes directly.

I gingerly entered the gill net hammock and it held!. A longer net would have been more comfortable but the experiment was a success. The more I wiggled to settle in the hammock the net began to slide from the outsides inward so fastening the head end would be needed. It seems that the foot end could remain loose as it can be slid to the middle in order to step out of the net to exit.

This hammock is certainly not convenient or perhaps for some even safe but it might be better than laying on the ground in certain conditions and uses simple materials to construct. As usual, it was a fun project of discovery and learning.