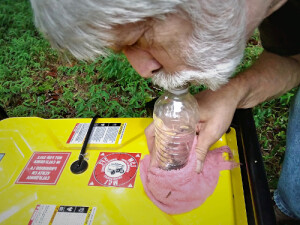 I usually post articles related to bushcraft/primitive skills, but I wanted to share a nice hack that I used recently that may prove to be useful for those situations where you might be working with a small gas engine outdoors on a project. The ability to improvise is a valuable skill that can save the day in emergencies.

I was using a generator in the field using power tools. Everything was going well but I didn’t pay attention to the fuel level and it ran out completely. The seemingly normal thing to do is add more fuel and continue on. However, the fuel line between the fuel tank and carburetor was drained dry.

Some engines have a flexible plastic “primer pump” that enables the carburetor to be primed. This engine did not. Once I added fuel my attempts to start the engine failed. I had to get the fuel from the tank to the carburetor.

Years ago my father showed me a device that he used on his lawn mower. He began with a 35mm plastic film canister where he had cut out the bottom to create a tube. On that end he placed a turkey baster bulb. The canister matched the gas tank opening perfectly so when it was placed there he would squeeze the bulb thus adding air pressure which forced the fuel on into the fuel line in order to prime it.

I wondered what I could do in my situation and realized that I had an empty water bottle. The bottle’s diameter matched the gas tank opening so I cut out the bottom of the bottle and wiped it dry. I used a rag to seal the bottle base around the tank opening and the open neck of the bottle enabled me to blow into the device to create air pressure into the tank. In short order I was able to prime the engine and continue with my work.

I hope that this hack can be useful to my readers and could prove to be useful if you find yourself in a similar situation.