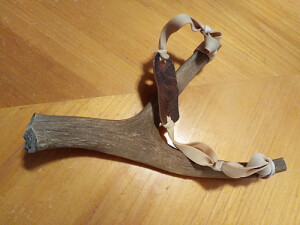 After writing my last article “Acorns And Slingshots” I experienced a renewed interest in slingshots and began to practice shooting using the acorns that were found in abundance in my area. I used a modern slingshot composed of a metal frame, surgical tubing for straps, and a folding wrist brace integrated into the plastic grip on the handle. This model provided quite a velocity for launching it’s ammunition.

In my youth my grandfather made for me a simple slingshot using a “Y” shaped cutting from a tree branch along with thick rubber band straps with a leather pouch. I had a lot of fun using it but never achieved critical skill for hunting.

Awhile back I found a shed antler and kept it for any future projects and it dawned on me that it could be made into a slingshot. I began by taping off the places where it needed to be cut and proceeded to use a hacksaw for that task. I also had some spare leather pieces that I used to make the pouch. What remained was the need for the straps.

In days gone by large wide rubber bands were easy to come by but these days the only ones that I could find were half the lengths that I remember. In order to get the length needed I had to “daisy chain” or loop the two rubber bands together, then using the same technique of looping I attached the ends to the pouch and antler frame.

I was eager to try it out. Without the wrist support of the modern slingshot I had to readjust my grip on the unsupported handle. My initial shots proved to be better than when I used my modern slingshot! By my third shot I was able to hit a two and a half inch can lid at seven yards! I think that a contributing factor is that I lean the frame forward as I shoot and it seems to make a notable difference. For now, this antler frame is my go-to slingshot and I am delighted at the results.

For shooting tips and inspiration you can watch “Carolina Camera: The Sling Shot Man” to witness some remarkable marksmanship.