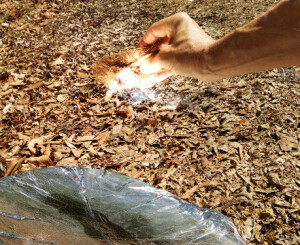 I have for several years held on to a discarded satellite dish antenna for the purpose of using it’s parabolic shape to create a solar/optical device to make fire. It was finally time to enact my experiment. There are a variety of uses for satellite dish antennas that can be found on the internet but I had firecraft in mind. I was successful using kitchenware in the past to make fire so I decided to employ the same method.

The materials that I used included a satellite dish antenna, some olive oil, and a discarded birthday balloon made of silvered Mylar that I had salvaged from a local dumpster. The oil was used for adhesion because of it’s dense viscosity and sticky nature towards the thin Mylar foil but a person could use a spray adhesive instead for a more permanent application. 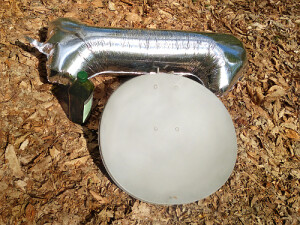 I cut the balloon along the side so that the Mylar film could be spread out into a flat sheet. Next I cleaned the surface of the antenna before pouring a small amount of oil on the antenna dish and spread it by hand evenly on the surface. Then I laid the foil over the oiled dish surface and smoothed it out with my dry hand. I tucked the outlying foil under the dish edges to prevent light winds from lifting it off of the dish. Then I pointed the dish at the sun.

For optical firecraft I use dark colored tinder because it absorbs heat better. I prefer using fibrous material that I press together to create a flat surface onto which the reflected light can focus. You can place the palm of your hand above the dish briefly to find the focal point of the light rays so that you can know where to position the tinder. After a few moments smoke began to appear from the tinder bundle and in short order an ember began to glow whereupon I removed it and blew it into a flame.

How practical is this method? Much easier than most primitive methods used in the woods but keeping in mind that these materials are readily available in an urban setting where it would most likely be used. Of course, you’ll also need sunshine!