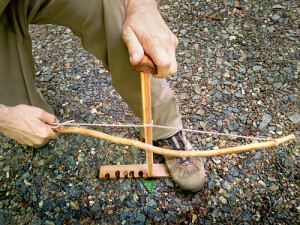 Learning how to make fire by using the bow and spindle fire by friction method often requires a great amount of practice before it can be accomplished. Two of the challenges that can occur are spindle flip out and a sustainable spin rate. Using a longer spindle and longer bow can be a game changer.

As most firecrafters will attest, repeated use of a spindle will cause it to shorten with each use until it becomes a stub making it more difficult to use because it is prone to flip out of the hearthboard socket while bowing. Using a longer spindle gives less lateral pressure to the spindle, thus making it more stable and easier to hold in place when using a bearing block. Another problem is that spindles can get “polished” in a spot that causes slippage by the bow’s cord. A longer spindle offers more surface for the cord to operate and the cord can be raised or lowered on the spindle for better traction. I also recommend operating the bow parallel to the hearthboard as the “V” notch on the edge can wear out a bit allowing the spindle to slip out of the socket more easily when perpendicular bowing is employed.

A longer bow allows for fewer strokes because there are more spindle rotations per stroke. This translates into longer moments of friction heating the hearthboard and the sustained heat creates char more quickly wherein an ember is created.

There is a great satisfaction when creating fire using a bow and spindle. I remember the glow of my first successful ember emerging from the smoldering pile of char. I still remain amazed each time at this accomplishment. Using a longer spindle and bow can get you there more quickly and with less effort.