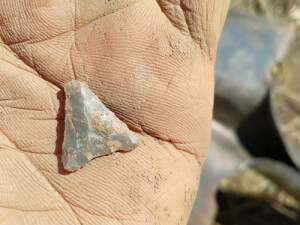 One of my delights is hunting for arrowheads. I had an opportunity to join an archeological dig of a Spanish Fort site in Burke County of North Carolina dating from the mid 1400s. I felt that the chances were good that native Indian artifacts might be discovered there. Of course if any were discovered there would be no “keepers” for me except for the thrill of finding something historic that would help bring understanding of the times.

My Son signed us up for this dig and as we had arrived early, we helped to set up chairs and a tent for the day’s class. After the rest of the participants arrived, the instructor preceded with the orientation. After the history of the site was cited the folks with previous experience were released to a plot to begin digging while the rest of us were instructed on the manner of the work ahead. My son joined that group as he had been on a previous dig a couple of days previously. 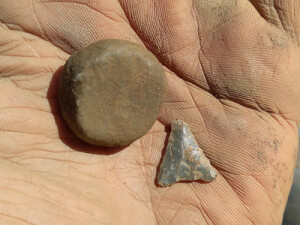 After the orientation I was able to join my Son’s group and as I walked up there was a stir of commotion as a member had just unearthed an arrowhead. I asked what style it was and the leader said “we just call them Burkies”. It was most likely almost 600 years old. I was eager to find more arrowheads but no more were to be found that day, however, my son found a clay game piece and everyone in our group found sherds of pottery in the piles of soil that we sifted throughout the day. 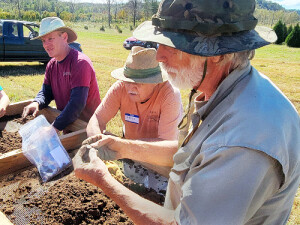 In the past I have found arrowheads independently in plowed corn fields and in a creek, but an archeological dig can give you some sense of history associated with the artifact that has been found. I heartily recommend participating in an event like this that gives greater meaning to artifacts that are uncovered and contributes to the history of the community where they are found.