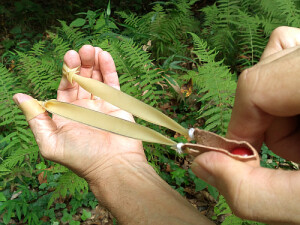 Over the years I have enjoyed using a variety of slingshots. In my youth my grandfather made a slingshot for me using a “Y” branch with rubber bands and a leather pouch tied together with string. As a teen I acquired a “Wrist Rocket” that used an aluminum frame incorporating a wrist support for more leverage with surgical tubing used as straps. Recently I experimented with an alternate frame, resulting in the creation of an Antler Slingshot. Eventually I wondered if a frame would even be needed for a slingshot so I started to explore that possibility. 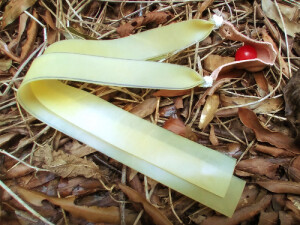 At first I met a slingshot craftsman who was also a regional competitor. I inquired about the possibility of just pinching together a rubberband/leather pouch set between my thumb and forefinger. He said that it could be done but you would need to rotate your hand downward at launch as you released your projectile. I bought the set from him and then decided on what ammunition to use. 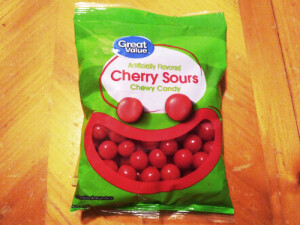 Steel bearings (or shot) was expensive as were clay pellets, so I went to Walmart and found “Cherry Sours” candy that was cheap, biodegradable, environmentally safe, and coincidentally just the right size. 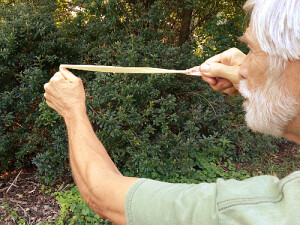 I was careful at first, trying to apply the rotation technique and actually hit a 3 inch can lid on my DIY Simple Spinner Targets from 7 meters away, but shortly afterwards I got careless and smacked my thumb multiple times really hard, with the result of creating a blood blister under my thumbnail. If you choose to try this method I would recommend wearing a leather glove on your hand at first.

Deterred by the difficulty and pain, I considered trying an alternative safer method of tying the ends of the rubber bands into loops that I could slip over my thumb and forefinger to use as a frame. Voila! It was smooth shooting and I hit my target a number of times… it’s quite intuitive for aiming. However, unless you have very strong fingers your draw back will be somewhat limited, but, it would have knock down potential for small game.

For purists… using your fingers to hold the bands would in essence be a frame, but you wouldn’t need a mechanical frame that would have to be constructed, and be potentially awkward to carry. Eliminating a frame would make for ultra light weight and convenient when backpacking or for easy storage.