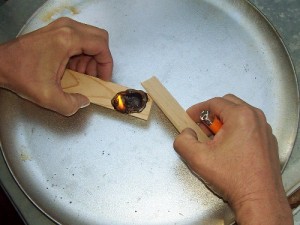 There are different occasions when an adhesive is needed for the construction of projects or repair of items. The best adhesives are specifically manufactured for certain materials and conditions but there are alternative substances that can be used as an adhesive in a pinch. In a previous post “Improvised Emergency Glue” I used Styrofoam and gasoline to form an adhesive “goo” that was quite versatile and strong. In light of emergency adhesives I recently discovered another approach.

It came by accident. I was wondering if a plastic drinking straw would work as an emergency tinder. When I lit one, it had an unexpected result. There was a small flame but the straw began to shorten while melting and started to drip. That’s when it occurred to me that the molten plastic might be used to glue items together. I had two wooden slats close by so I lit the remainder of the straw and let it drip on the end of one of the pieces of wood. As the flame got close to my fingers I dropped the remaining straw onto the puddle where it finished burning. When the flame went out, I applied the end of the second piece of wood on top of the puddle and pressed it down. Then I put a heavy object on top of them and waited about 5 minutes. I removed the weight and was able to pick the glued sticks up by one end and wave it around like a wand. Then I grasped the sticks at each end and gave it some torque to test it which proved to be quite strong. With increased pressure one of the sticks broke before the adhesive did.

Although it’s a little difficult to control the melting process I would imagine that it could also be used as a seal for small seams or holes. You can try this out for yourself to get a feel for it’s capabilities. Needless to say, use caution when handling molten material to avoid personal injury and only use flames in a safe noncombustible work area.