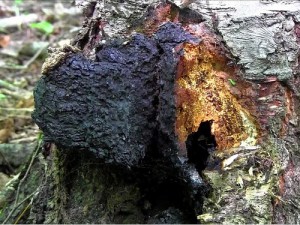 Through the years I have followed trends in bushcraft and primitive living skills interest groups. Over a decade ago fire pistons were new on the scene and a tinder fungus, Inonotus obliquus (I.O.) a.k.a. “chaga”, was often used for creating an ember. This was an amazing material that I wanted to know more about. At the time I lived in California, but this material came from the Northern States and so I was unfamiliar with it. In my research it was noted that I.O. grew on birch trees and some beech trees. It has been described as the blackest growth seen in the woods. When I moved to North Carolina, I researched to see if I.O. could be found, and it apparently exists in the Western mountainous region. As I live in the foothills, this gave me hope of finding some one day.

Recently I was hiking along a river and spotted black clumps in a beech tree. I was very excited by this find and collected some samples. When I returned home I cut a slice and tried to catch a spark. I used a ferro rod for maximum heat and duration of sparks but the material wouldn’t catch the spark. I let it dry out for a few days but had the same results. After photographing the material I posted it on a Facebook group page where it was identified as Scorias Spongiosa (S.S.) a.k.a. “honey dew fungus”. It is a fungus that grows on aphid droppings and is restricted to one species of tree, American beech. 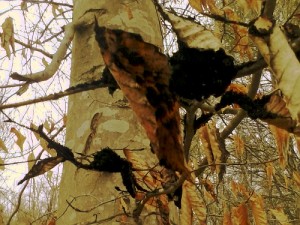